I do not charge any fees to design your opioid awareness product so that way you can be creative in the creation of your promotional incentive products for your program! We make ordering as easy as making a sandwich! See below for some good product ideas for celebrating National Drug & Alcohol Facts week; Let's get creative with our ideas and work together to educate kids and the public about alcohol and drug abuse. I create the design for your National Drug & Alcohol Facts Week product for absolutely free!

See below I have compiled a small list of popular products for your National Drug & Alcohol Facts Week! Click each item to see detailed information pertaining to that product and remember we customize it with anything you want including your logo imprinted and a special campaign message if you so desire.  Check out all of our other drug free products by viewing our product catalog at the top of the page! These are just a few popular drug free products we carry! 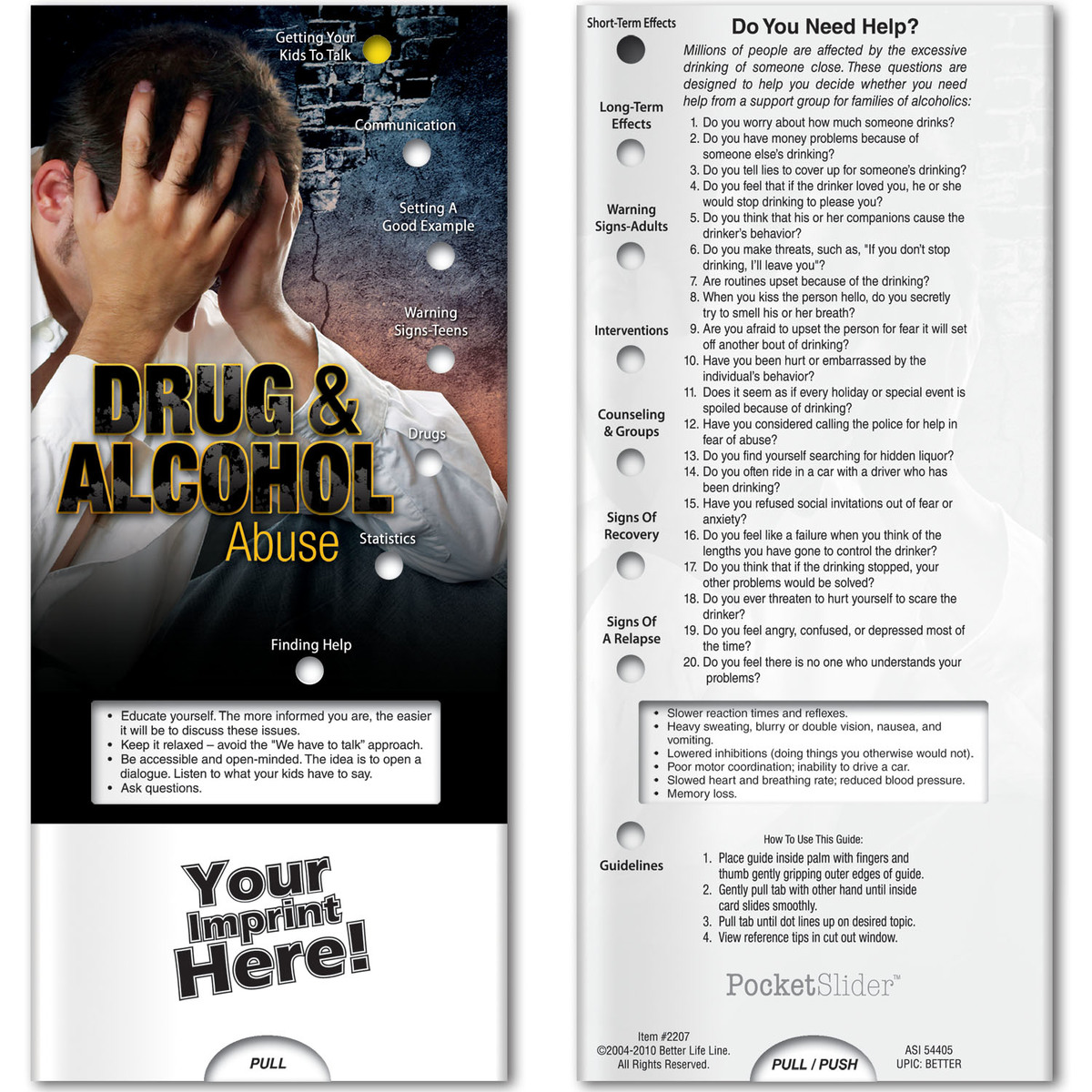 If you need help, or know someone that does, this slide chart can help you on the road to recovery. Includes topics such as communicating with your children, setting a good example, warning signs for teenagers, suggestions for finding help, counseling and much more. 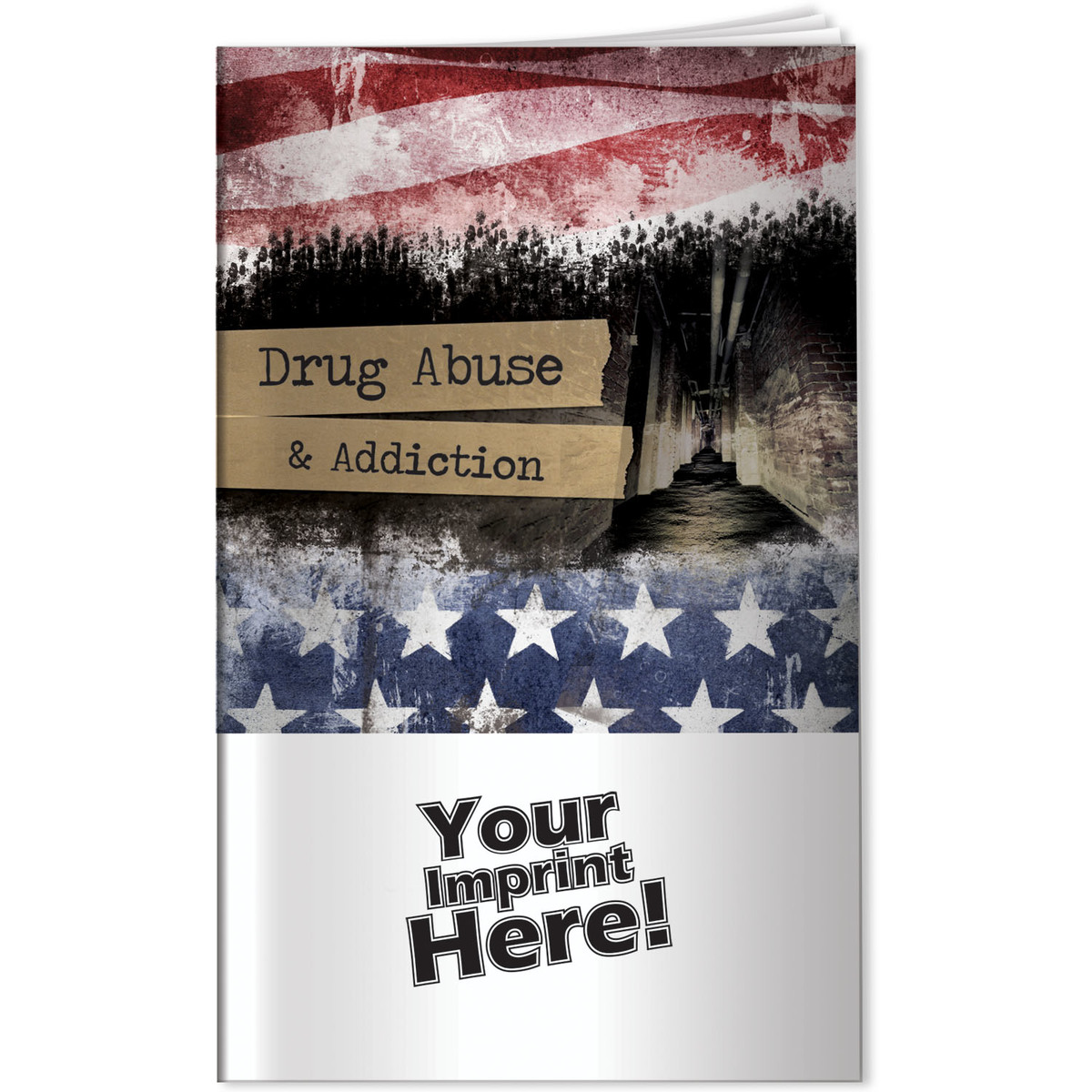 Stress from serving in the military can sometimes lead to drug abuse. Learn the warning signs, symptoms and how to get help. This booklet describes many different types of drugs and their effects on the people using them.

Do you need to keep track of information like your business transactions, meetings, and health records? These amazing booklets will give you essential advice and help keep your life healthier and more organized. 36 pages. 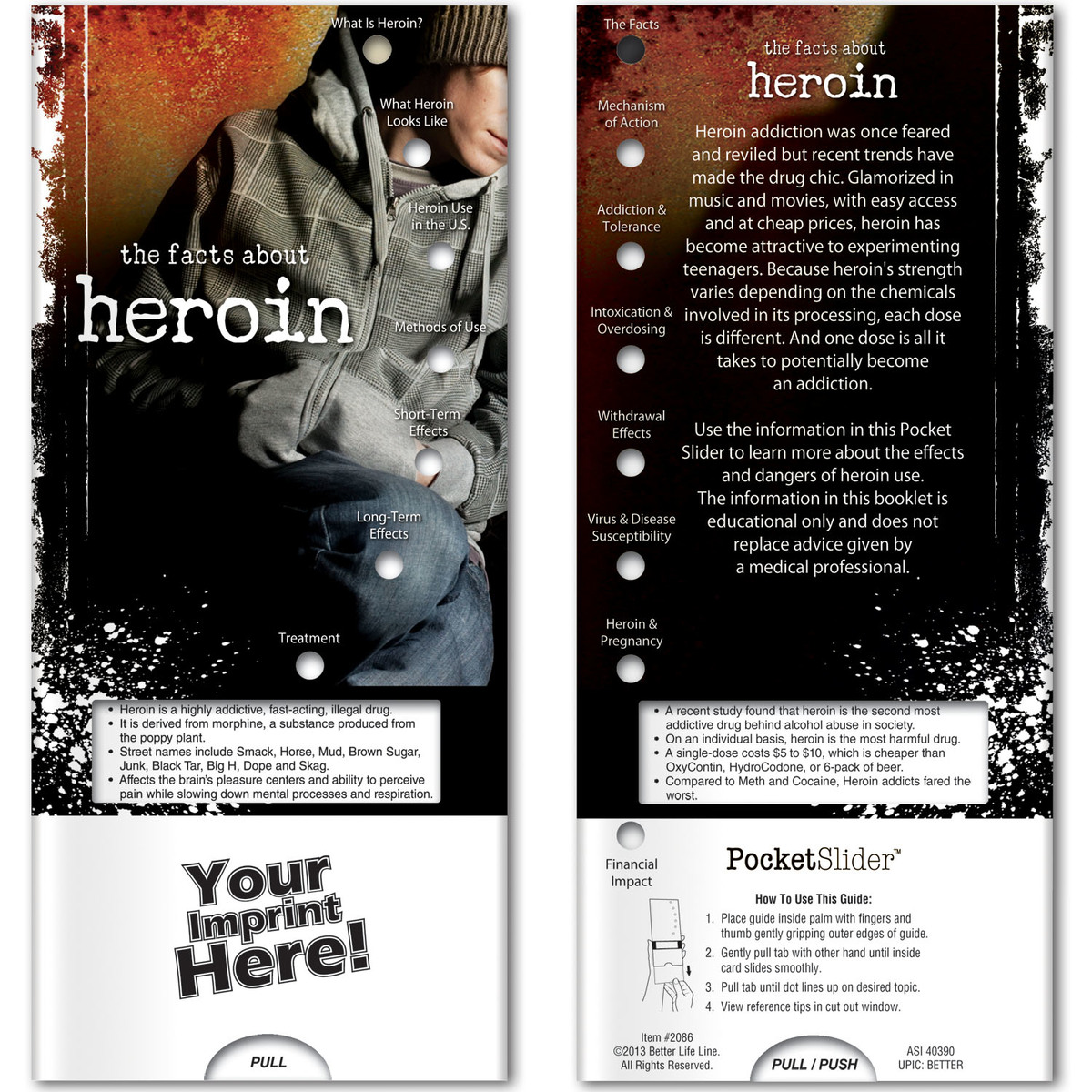 Pocket Slider - The Facts About Heroin

Heroin is a highly addictive, fast-acting, illegal drug. This Pocket Slider describes the short and long term effects of this drug, methods of use and how it compares to other drugs. Learn about addiction, tolerance, overdosing and withdrawl effects as well as the different types of treatments available for those addicted to this dangerous drug. 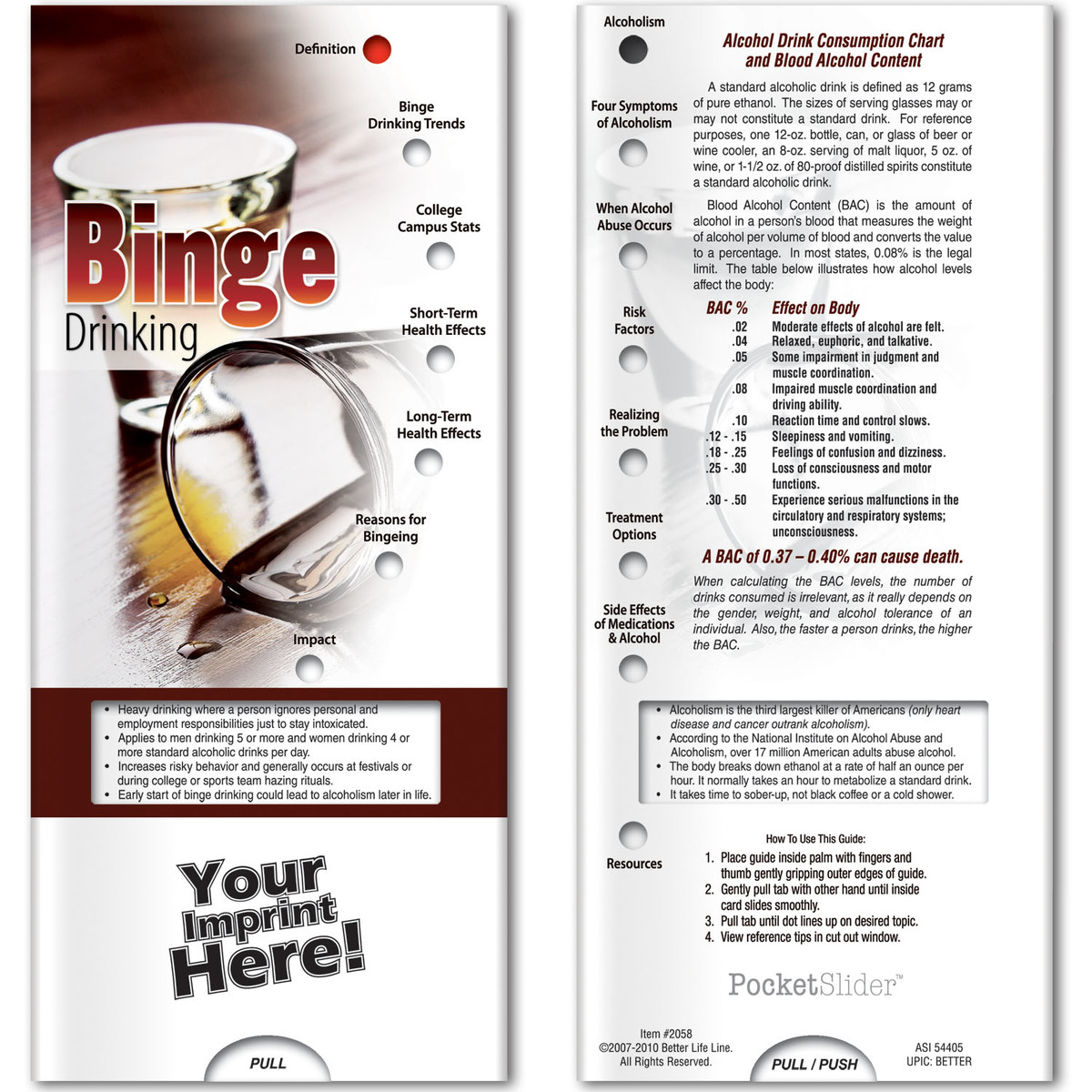 Binge drinking is a significant issue in our society and this Pocket Slider helps to explain the problem and outlines drinking trends, health effects and treatment options. Save a life. This educational guide teaches the dangers of consuming too much alcohol. Not only is it a risk factor to those around you but it is also a health concern for yourself. Great for teenagers and adults.

This slide chart is your guide to drug problems, alcohol and substance abuse. By highlighting warning signs and symptoms, and outlining the various treatment options available, this pocket guide gives you the help you need before it’s too late. Take control of your life…seek help today. Imprinted with your message. Sized perfectly for mailing in a #10 envelope. Excellent salesperson leave-behind product. Outstanding trade show or conference brochure. This product is also ideal for doctor’s offices, health clinics, pharmacies, and rehab and treatment centers. 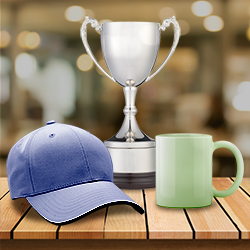 This is a fairly new observed event for drug prevention & drug free awareness, brought to us by the great minds at NIDA (National Institute on Drug Abuse) and the NIH (National Institute of Health); This drug-free event was launched in 2010 and is now being observed by many drug free coalitions and hundreds of initiatives throughout America! We are seeing this event becoming as widespread and recognized as Red Ribbon Week!

National Drug and Alcohol Facts Week is supported by many federal agencies, including the White House Office of National Drug Control Policy (ONDCP); the Office of Safe and Healthy Students in the U.S. Department of Education; the Substance Abuse and Mental Health Services Administration; and the Drug Enforcement Administration. Each agency will post National Drug and Alcohol Facts Week information on its website and encourage the development of special events linking experts to teens. We highly encourage your coalition to pick up and adopt this drug free event for drug prevention efforts.

National Drug & Alcohol Facts Week is an annual event that we encourage you to celebrate with us to educate the youth and raise awareness on the dangerous facts revolving around alcohol and substance abuse use.

With so many voices and opinions out there, it is important to understand the facts.

Made is that when you are a teenager (and even in their early twenties), still are growing and developing, and substance abuse during these years in particular can have a lasting impact. Another fact to keep in mind: the brain is much more vulnerable to addiction over the years. 90% of Americans with problem substance abuse starting smoking, drinking or using other drugs before the age of 18. Drug addiction is considered by some health professionals to be a genetic disease, although this opinion is highly controversial it remains to be proven.

As for drug use, experiences and individual reactions vary, it is important to understand the common risks and effects, both short- and long-term. Knowledge can be the key to better make their own decisions.

Information provided is not to avoid that anyone seeking medical treatment under the advice and care of your physician. A variety of substances offer potential medicinal value, but that does not deny its risks, especially when abused. Prescription drug abuse is on the rise so make sure you lock up your meds and join in on some of the new social norms campaigns revolving around "Pitch your Pills"

In 2013, more high school seniors regularly used marijuana than cigarettes as 22.7% smoked pot in the last month, compared to 16.3% who smoked cigarettes.

60% of seniors don't see regular marijana use as harmful, but THC (the active ingredient in the drug that causes addiction) is nearly 5 times stronger than it was 20 years ago.

1/3 of teenagers who live in states with medical marijuana laws get their pot from other people's prescriptions.

4.2 million Americans aged 12 or older (or 1.6 percent) have used heroin at least once in their lives.